What first drew me to Audacity was the way their music sounded so intense yet melodic at the same time. They are a metal band from Milwaukee, but they don’t sound like typical

metal. It’s hard to pinpoint exactly where they would fit on the spectrum, but it’s easy to see why people are into them. Nicholas Heath’s, the bands singer, voice is something that can only be described as raw. It isn’t quite clean vocals and it isn’t quite scream vocals, but it’s filled with an intensity and passion that isn’t often heard. The guitar work of Alec and the band’s other Nick is some of the best I’ve heard, sounding simple at first but it takes some time to really hear all the layers to it. JT’s bass work provides a solid rhythm behind the guitars. And Ryan on the drums kills it, even if he isn’t the best at estimating the size of a stage. I recently talked with Heath about the band and the thing’s they’ve been up to.

How long have you guys been in a band together and how did Audacity form?
Heath: Most of the guys played in previous bands together throughout high school ( Dressed to Kill and Ending Eris) and Audacity just formed through those bands I’d say. A few member changes and name changes.
Did you guys always intend to be a metal band or did you try different genres first?
Heath: I think our sound just comes to us naturally. I wouldn’t

consider us to be a metal band. We just make the music we want to hear and we are lucky enough to have other people want to hear it.
You guys have a pretty different sound than your typical metal/metalcore band, is that intentional to make yourselves stand out or was it just the results of your different talents?
Heath: Like I said in the previous question, the sound just kinda came on its own I think. We all have different taste in music, so we all bring our own sound to the table and it has been coming together very nicely.
Now, you’re stage presence is aggressive, to say the least, have you ever injured yourself live? If so, what’s the worst injury?
Heath: hahaha yeah I’m pretty sure I’ve busted my lip at almost every show. We played a bar in Caledonia, Wisconsin over the weekend, and before our set I was messing around trying to see if I’d be able to jump and grab the rafters and when I grabbed them I didn’t realize they had razor blades all over them to prevent the birds from landing on them. Sliced all of my fingers up and bled everywhere. That was probably the worst so far.
If you could have a dream show, where would you do it and who would you play with?
Heath: I’m not sure if I could narrow down a dream place to play because I think we all want to travel as much as possible. Every place is exciting to play. I’d love to play with Brand New, Everything Time I Die, letlive., and if I could go back in time and share the stage with Underoath that would be rad.
You guys recently put out a split EP with After Hour Animals, how did that come together?
Heath: We are really good friends with those guys. We were just hanging out one day talking about stuff and the split came up. We both wanted to put out a few new songs before another album and thought a split Ep would be a good idea. I’m really happy with how it turned out.
There was also a music video a couple months ago, what was that process like?
Heath: Music videos are weird haha it was a lot of fun though. We worked with a company called Enterprise Films. They are awesome at what they do and made everything super comfortable. If anyone wants any type of filming done, contact those guys. It was a lot of fun.
What do you think the WI music scene needs to help other artists thrive and see the success that some have been able to find?
Heath: I think people just need to keep going out to shows, and supporting everyone out there trying to make music. In turn, the bands need to keep pushing themselves to get better 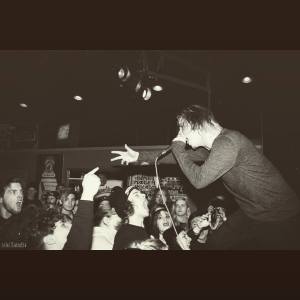 with each release too. Wisconsin music scene is solid though. The love Audacity has gotten from this state in the last year has been fucking awesome. Thank you to everyone who has supported us. Much love.
You can check out Audacity on Facebook, Twitter, and Youtube. To see their music video for ‘The Bottom’ click here.