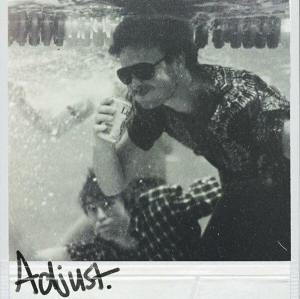 Formed in 2009, Of The Fact is a pop punk four piece who cut their teeth in central Wisconsin, a place lacking in a strong local music scene.  However lacking the scene may be, they thrived, and released their first EP, fittingly titled Big Plans For A Small Town, in the summer of 2013.

While Big Plans For A Small Town was a story of the band and how their hometown helped them develop, Adjust. shows a much more mature sound and writing style from the former.  While staying true to their pop-punk roots, the band shows how their experiences throughout their walks of life have shaped them and forced them to adjust.

According to guitarist/vocalist Griffin Belzer, Adjust “is about getting used to changes in life that are out of your control. It’s about accepting disappointment and making the best of a situation good or bad. It’s about looking back on where you were and what you’ve done, and looking forward at what’s next for you.”

In short, it’s an EP about coming of age, and accepting the changes that are out of your control, and by golly, Of The Fact absolutely NAILED it.

Kicking the album off with “On My Own,” Frontmen Ian Corder and Griffin Belzer really “grabs life by the face” and delivers a high energy, emotional track.  If we’re making comparisons, imagine Real Friends meeting the glory days of Drive Thru Records.  In short, the track kills.

“Fade” is another track that is very reminiscent of Real Friends, both lyrically and instrumentally.  From my understanding, the track tells a story of how the world changes, and you have to change with it.  It’s saying that just because you’re making adjustments, it doesn’t change the person you are, it just means you’re growing up.

Probably my favorite song on the EP, “Settle In”, is a very high energy, well written song.  Again, my interpretation, is that this song tells you about how even though it may be easy to settle in to old ways or people, they may be toxic relationships, and (I hate to beat a dead horse here) you have to adjust to change that relationship and move on from it.  This is an incredibly relatable song, and it’s so well written and catchy, it will be stuck in your head for DAYS.  You can check out the video they released for this song here.

Finally, the title track “Adjust.”  This song, again, has a very emotional, strong presence and provides a sense of resolution to the album.  It wraps up the album extremely well, in a slow, easy to listen to, and emotional track.

Overall, this is an incredible EP.  It’s a beautifully written album detailing the struggles of that awkward “coming of age” phase of life, and how you’re constantly adjusting to whatever life has to throw at you.  Corder, Belzer, Guitarist Tommy Yang and Drummer Ben Belzer deliver a phenomenal listening experience, and an even better live show.  Keep an eye on these guys, they definitely have… Big Plans For A Small Town (I’m done with puns now, I’m sorry).

You can check out Of The Fact on Facebook and Twitter, and you can download both Adjust. and Big Plans For A Small Town on their BandCamp page.