Metalcore music is all the rage with kids these days and with that comes a plethora of metalcore bands. A lot of them are fantastic, with clean and intricate guitar work with passionate vocals, but sometimes in a pack crowd it’s hard to break-out. Our very first featured artist, Audacity, was a metalcore band that stood out because of their heavy sound and intense lyrics. This month’s featured artist, Imagine The Silence, caught my attention for some of the same reasons. Their sound is definitely metalcore, but it has a unique lightness to it while remaining heavy and Streeby’s vocals are just on point. (On fleek? I’m not quite sure what’s hip these days.) What I love most about this band though is they are unafraid to go after tough subjects like unbalanced break-ups and the existence of a higher power. It should be known, I don’t just say these things because they are our featured artist, they are featured for a reason and I stand behind all the gaudy praise I throw their way. That being said, I recently sat down with Julian Streeby, Imagine the Silence’s lead vocalist, to take about the band, the lyrics, and their plans.

Our usual start, tell us a bit about the band.

JS: We were all playing different local bands in the scene when we decided we wanted to come together and do something different. I was in a band called Brace for Impact and we just kinda broke up and decided not to continue. So I was looking for new members and

eventually I came across Nick, Eric, Josh and we just decided to start doing new stuff, something different. We had a couple other members that didn’t really work out, so our current line up is even more recent, like November of 2014.

So, with such a new band, how were guys able to put out Aude Distare so quickly?

JS: It was some stuff that we had had in the works for a couple years. We had been writing this album for a couple years and nothing had solidified or finished until pretty much right before we released the album. It just took so long because we kept taking so many breaks and member changes, so it was a collective of about 2 years of work. Once we finally had a solid line up, with Josh who is a phenomenal bassist, we knew we had something really good going for us. We were finally all on the same page and decided to go into full force.

After all that hard work, line up changes, and general difficulty to getting started, what’s it like seeing such an immediate response to your album?

JS: It’s awesome, I didn’t really know what to expect. I know a lot of bands will say this, but I honestly think we have a completely different sound. We try and do something different, that’s what the album literally translates to “dare to be different.” I guess I didn’t really know what to expect, we thought it sounded cool and were really happy with it. We are just really stoked people are enjoying it, I honestly didn’t expect people to like it as much as they do.

We’ve talked about a different sound and going with a latin album name is certainly different. Why take that approach?

JS: It’s because something that’s not used anymore, so it goes with the theme of the album and what we’re trying to do. We aren’t trying to follow trends, we are trying to create something that people wouldn’t think do. Thinking outside the box really.

You guys do sound different, but you have been compared to ADTR and Of Mice and Men, do you guys agree with that or not?

JS: I love both of those bands, their musicianship, but I guess I think we have so many different influences. I mean my favorite band of all time is Sense Fail and I don’t think we sound like them, but they definitely influence the things that I write and think about our band. Nick loves Ice Nine Kills, Devon is into Parkway Drive. Stuff like that really influences. We are inspired by everything, there isn’t a bad genre of music in our eyes. We even go back into older stuff like Iron Madien, Slipknot. There’s tons of stuff outside of the genre we play that has definitely influenced our sound.

With Aude Distare, it’s full of amazing tracks, but you guys singled out One Thousand Words as your collective favorite, what is so special to you about that song?

JS: We approached that song with the mindset of looking to write a softer song, it was meant to be about something personal. It’s written in a major key and we came into it knowing it was going to be a kind of sad song. It means so much to me because the lyrics are about a time I was going through a pretty rough break-up with what was probably the only serious relationship I’ve had. It was kinda messy or whatever, but at the end of the day I was like if I love this person as much as I say I do then I just want them to be happy. That’s what the song is kind of about, we broke up but I didn’t really want to break up but it was what was best for her. It’s just wishing her the best and reflecting on the times we had. I think we bonded as a band while writing this song because it was such a sentimental song.

Are We Gonna Ouija or What? recently had a lyric video come out. What was it like seeing that come together and what is the song about?

JS: We wanted to put a video for this song because it’s another one that we are very proud of because of the lyrics. It’s very metaphoric and it talks about something all have in common, we are all unsure about there being a higher power. We talk about how sometimes we can feel this higher power and sometimes it’s non-existent. The very first line is like is it all in your head or is it actually a higher power, it’s essentially about agnosticism. It’s just something we think a lot of people can relate to, so we wanted people to see the lyrics. We saw this as having the most potential to having people latch on, we released as a single before we actually put out Aude Distare.

For being a newer band, you’ve already shared the stage with some big names like Red Jumpsuit Apparatus. What’s it like getting to play with those types of bands?

JS: It’s awesome, playing with Hawthorne Heights and RJA, those bands are definitely ones we listened to growing 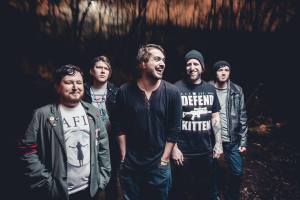 up. You can’t go anywhere without people knowing Face Down. With After The Burial it was cool because they are from Minnesota as well and we really looked up to them. We went out with them and some other bands who are really making waves in the scene right now and they were complimenting us and our sound, they actually thought we were signed to a label. They had tons of humbling things to say to us, they were just such caring and cool people.

So, there is a new music video for Are We Gonna Ouija or What? coming out soon and I’m sure there are tons of other things you have planned, so what is next for Imagine The Silence?

JS: We are already writing a new album, we actually already have a bunch of new material. So, we’ve been planning a lot of stuff for that. We are kind of looking for a label, but we want to still be able to do what we’ve been doing and it’s worked without a label. If we find a label that’s cool, but we’ve been doing fine on our own and I believe in what we’ve been doing. I have faith we will be able to make waves with what we’re doing, I mean our new stuff is already night and day different from Aude Distare, I’m really excited for it.

One thought on “AotM – Imagine the Silence: Interview”