There are very few bands that can harken back to true punk roots. As much as we love the pop-punk genre, it’s never been true punk, it’s not the real in-your-face, high energy, fast-paced, no-holds-barred, destructive power. The Retakes have retaken (see what I did there? It’s a pun! Are we cool yet?) that lo-fi genre and made it their own. Coming out of Minneapolis, MN the band is working towards their second solo album, releasing a split with Gramma and a compilation album between now and their debut album Girl. They also recently dropped their latest single Trash which keeps up with the grunge-y attitude that first drew us to the band. With 2016 only barely started they have also dropped a music video and added a new bassist, Katelyn Emily Regan, setting up The Retakes to brazenly push forward like they’ve been doing since their inception. Before they take off and become too cool for local publications like us we sat down with vocalist/guitarist Miles Halverson to discuss the band, the music, and the rubber duck.

MMC: It’s everybody’s favorite question, the single most interesting one, tell us a bit about the band and how you guys started?
MH: We all went to high school together and have played in bands since then. Kate is new, she just joined a few months ago. Evan and I have been together for a long time.
MMC: How did you guys settle on straight punk music? I know the Minneapolis scene is pretty full of pop-punk acts, was it a way to stand out?
MH:  I discovered punk rock in high school and ever since then I’ve wanted to make punk music. I don’t think it’s a conscious effort to sound different at all, I just prefer certain sounds. There are a lot of good bands in this state.
MMC: What are some of your biggest influences?
MH: I am a big Beatles fan and a big Dylan fan. But I listen to the Pixies, Sonic Youth, a lot of noisy stuff. Particularly atonal piss rock. Music that sounds like mold scrapped off of a basement floor.
MMC: Your band profile says you are made up of three dads and a rubber ducky, I’m just curious as to who the duck is?
MH: You!
MMC: You recently dropped Trash as a preview for the new album, when’s that dropping?
MH: We expect in the next month or so. Mark Estephan, who is in a local band named Vast, is producing it and we’re excited to be working with him again.
MMC:  A video for Santa Maria also dropped a couple months ago, what was that process like? Was it weird to watch yourselves through the video?
MH: It was a lot of fun. Tim from Superheater recorded it and it only took like 2 hours. Superheater is a great band, go check them out too.
MMC: Other than an album, what’s next for you guys? New videos, tours, world domination? Or at least Minneapolis domination?
MH: We’ve got a show in Milwaukee this upcoming weekend! Other than that not a whole lot. 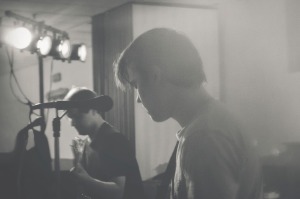 The Retakes are busy being an up and coming group who we are excited to hear more from. With an album in the works we’ll have to be satisfied (and trust me the music is more than satisifying) with the tracks on their bandcamp or you can like them on Facebook. You know what, do both, go listen to their bandcamp AND like them on Facebook. Also check out their video for Oh, Santa Maria! while you’re at it. You’re welcome.