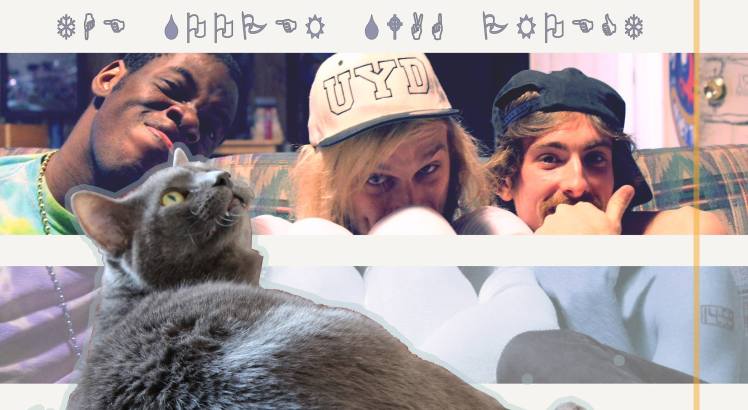 The Sooper Swag Project is a three piece rap group out of Chicago, IL. Their unique brand of swag filled mathrap has captivated audiences since they first showed up in the Chicago hip-hop scene back in early 2012. Back in April they released their most ambitious project yet: Badd Timing. Last week we sat down with Nnamdi, LD, & Thrashkitten, to discuss their new album, their inspirations, and beyond!

THANKS FOR SITTING DOWN WITH US, GUYS! FIRST OFF, WHAT’S THE STORY BEHIND THE SOOPER SWAG PROJECT? HOW DID YOU ALL MEET AND HOW DID THE PROJECT COME ABOUT?

The three of us met through the local scene on the south side of Chicago. Nnamdi and I (Thrashkitten) got together and made “Drop it in Some Water”, a song later released on our self-titled album. Nnamdi and LD knew each other from their math-rock band The Para-medics. We all linked up to make “I Swag” and later “Swag Swoop Swerp,” our first collaborative Math-rap song. Eventually, we compiled a healthy cut of songs so we figured we should just be rappers in a “rap band” together. I don’t think any of us had real plans to pursue rapping until we had met each other (sentimental emoji)

WHO WOULD YOU SAY ARE THE GROUPS LARGEST MUSICAL INFLUENCES?

WHAT ARE SOME DEFINING CHARACTERISTICS OF THE CHICAGO HIP HOP SCENE. DOES YOUR PARTICULAR BLEND OF SWAGGED OUT MATH RAP MESH WELL WITH IT? OR ARE YOU GUYS MORE OF A BLACK SHEEP IN YOUR SCENE?

We usually shoot to play shows with a variety of genres, so we are more known in the indie scene. We haven’t played that many strictly-rap shows. Sometimes our odd timing stuff doesn’t hit the hip hop traditionalist the way we’d like however, the Chicago hip hop scene is booming right now and through it a lot of creative music is coming out. I think as hip hop grows we will be accepted more in the hip hop community.

WHAT ARE YOUR FAVORITE KINDS OF SHOWS TO PERFORM AT AND WHY? (LARGE VENUE SHOWS, HOUSE SHOWS, ETC)

Big shows are fun (because they are big shows,) but there are those feels you get from them dirty house show memories. The people you meet and the silly things that happen there. We are pretty happy to do any sort of show.

WHAT MORE POPULAR ARTISTS, IF ANY, WOULD YOU GUYS BE INTERESTED IN WORKING WITH IN THE FUTURE?

That’s a tough one. We would work with about anybody as long as it would result in a unique song. Probably wouldn’t work with Nicki Minaj though, she freaks us out and her butt is really weird.

WHEN YOU GUYS SET OUT TO MAKE BADD TIMING, WAS THERE A PARTICULAR GOAL IN MIND OR SOMETHING YOU WANTED TO DO DIFFERENTLY COMPARED TO YOUR OTHER RELEASES?

Badd Timing was set to be our full attempt at displaying Math-Rap. Through our first 4 releases we had built the idea of math-rap with songs here and there (and hoped no one was doing it before us). So Badd Timing was all about nailing what we thought math-rap should sound like. Although we try to do intricate rhythms and flex our mighty math bars, the essence of the rap genre thus far has been repetition, energy, and usually a hook or two. We tried to embody these things as well as incorporating a wide variety of music, progressive timings and polyrhythms (<— Big word!).

WHAT IS THE WRITING AND RECORDING PROCESS LIKE FOR A SOOPER SWAG PROJECT RELEASE?

Typically our process of making a song is done by us sending audio files over email. I usually produce the beat and send it to the boys. They do their nasty nasty thing and send me the heat. I go “woo woo” and work the magic. Mix, flip it, throw it in a biscuit. Before you know it, we have a certified 100% guarantee “show your friends” banger. Nnamdi and LD make beats for the project as well. Badd Timing was recorded in sessions together for the most part. (The More You know!)

OF THE THREE YOU, WHO COULD BEAT DRAKE IN A FIGHT THE EASIEST, AND WHY?

I don’t think any of us have ever been in a fight, however between our sly moves and funny tricks any one of us could give Drake a smashing I’m sure.

SHARE WITH US ONE OF THE CRAZIER STORIES FROM A SHOW YOU WERE AT.

We played a closed show at a recording studio in Baltimore. Just a bunch of rappers in this place doing their thing. it was tight space with around 30 people packed in there but it was a lot of fun. Just a really unique show that has always stood out for us as a group. That being said, come to any of our shows and i’m sure something crazy will happen.

WHEN SWAG EVENTUALLY CONSUMES THE WHOLE WORLD, WILL YOU ASSERT YOURSELVES AS KINGS OF THE SWAG WORLD ORDER OR CONTINUE YOUR MISSION TO THE FURTHEST REACHES OF SPACE?

We will always strive for balance and progression with our music. if you aren’t progressing as an artist then whats the point. we don’t want to be a cookie cutter group that just rips off current trends, however, trying to force something new could just result in something boring with no actual intention. So we will work with different people to better our selves and expand our openness to all music. We’re just trying to find a way to stay with current music without sacrificing what makes us unique as an artist.

FINALLY, WHAT’S NEXT FOR THE SOOPER SWAG PROJECT?

Shouts out Midwest Music Collective for holding it down. Thank you to all the people that support us and see the merit in our work. We are constantly blown away by the love we get from our people and it really helps us / motivates us to better our music and keep pushing material.