City Mouth is a Pop Punk band originally from Normal, IL, the most Pop 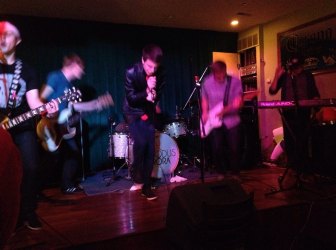 Punk name a town could have, but is currently based in Evergreen Park, IL.
Formed in 2013, Tell Me I’m Alright is their second release, coming out just at the tail end of 2015.

The first track “Only The Strong Survive” shows a great balance and collaboration in the creation process between Sanders and City Mouth. The intro is a bit unsettling, reminding me of a funeral procession before sweeping into a choir of ‘oohs’. The rest of the song serves as a great contrast to this intro with a more upbeat sound and lyrics bordering the line of confused and frustrated. The gang vocals and instrumental break parallel tiomt’s release from earlier this year, I Made You Something. However, they don’t swallow the song up, instead they add to the dynamic City Mouth has already set.

staying in the tone of the release and also providing stimulating instrumentation. The highlight of “Sleep Debt”, the collaborative track with Alice Pow and Jeff Schaller, are the lyrics: with lines like “finish the bottle before you lose your faith, find God in words of drunken rage” and “the motivation never lasts, let’s have a toast to going nowhere fast”. “Dropout” has a slower, steadier beat and the simpler arrangement of the instruments at the beginning, just drums and a guitar allows you to take in the smooth tone of Matt’s vocals as he sings the EP’s title line “I’m gonna need you to tell me I’m alright”. “The Best Of Me” is the most pop among the songs on the album, which could probably be chalked up to the happy guitar renditions and the way the bass settles farther into the background than in most songs.

The EP’s final song track “Shovel” winds it down on slow, sober note while paying homage to home roots and the city on every Northern Illinois band’s mind, Chicago. Brass instruments seem to be creeping their  way into alternative (for lack of better word) music, and it works well within this song. Overall, Tell Me I’m Alright puts City Mouth on the radar as an act that may easily fall into the pop punk genre, but doesn’t all into the pop punk bore. The variety of tempos was played versed, the lyrics were consistent, relatable, and simple, and each track had something new to show what this band had in store. While having three guest writers on a five track release could have easily lead to overconsumption of foreign material and underconsumption of the band’s, the collaborative songs fit in well without silencing City Mouth’s voice, which after this EP, you will be asking to hear more of.